A blood clot is also known as a deep venous thrombosis (DVTDVT). DVTs following knee replacementknee replacement typically present as calf pain and swelling of the lower leg. However, some DVTs can be asymptomatic as well.

There are several ways in which a surgeon will try to protect a patient from developing a blood clot. Walking and moving around early after surgery is helpful. Typically, during the hospitalization the patient will use compression devices, either on the foot or the calf (called SCDs). These will help pump fluid (edema), out of the leg. Wearing compression stockings will also help to prevent fluid from accumulating in the lower leg. These stockings will usually continue to be worn after discharge from the hospital. This picture shows Charles wearing compression stockings soon after knee replacement. 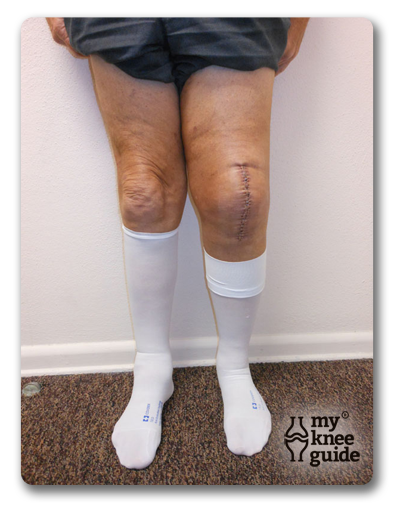 Coumadin®Coumadin® is a medicine taken by mouth. Each patient responds differently to this medicine and requires close monitoring of how much the blood becomes thinned. This entails having blood draws to be sent to the lab. Eating green leafy vegetables that contain vitamin K will interfere with the effects of Coumadin®. Therefore patients should not alter the amount of green leafy vegetables they eat while taking Coumadin®. There are also many medicines that can interact with the effectiveness of Coumadin®, and these should be discussed with your doctor.

Lovenox®Lovenox® is an injectable medicine. Lovenox® is injected just under the skin, usually into the fat of the belly. This medicine does not require the same strict level of monitoring, but some surgeons may require occasional blood draws while on this medicine. Xarelto®Xarelto® is a newer anticoagulant medicine that is taken by mouth. Other medicines that may be used to reduce the incidence of DVT include aspirin, heparin or Arixtra®.

Some surgeons are using Aspirin as an alternative medicine or in conjunction with other methods. Sometimes Aspirin may be used with a portable compression device similar to the SCDs used in the hospital. The patient will wear this portable device while at home.

Patients who comply with their surgeon’s DVT prophylaxis regimen have approximately a 4% chance of developing a blood clot in the leg following knee replacement surgery. However, it has been demonstrated that patients who do use any form of prophylaxis may have a rate of DVT as high as 46%. 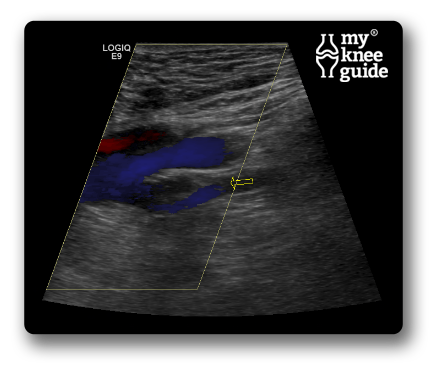 The most common way to evaluate for a blood clot is to perform an ultrasound of the leg. This is a painless test that is similar in nature to the ultrasound used for looking at a fetus during pregnancy. Here is an example of an ultrasound with the veins visualized in blue.

Rarely, a blood clot can dislodge from the leg and travel to the lungs. If this happens it is called a pulmonary embolus pulmonary embolus. With appropriate prophylaxis, there is approximately a 0.4% chance of this occurring following knee replacement. This is a very serious complication of this surgery. Symptoms of a pulmonary embolus may include shortness of breath, chest pain, coughing blood, rapid heartbeat, or fainting. These symptoms warrant an immediate call to your doctor or a visit to the Emergency Room.

Infection - An Uncommon but Serious Complication