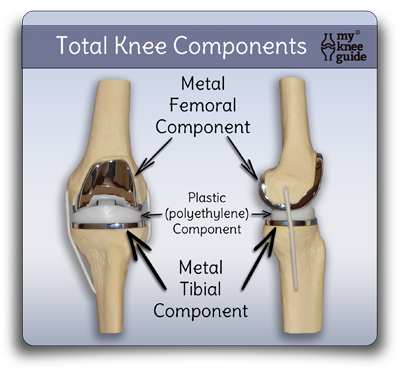 There are several types of full knee replacements that are available to your surgeon. The decision for the type of knee replacement to be used may be based on several factors. These include your particular anatomyanatomy, amount of knee deformityknee deformity, ligament stability, quality of soft tissues, and the surgeon's experiencesurgeon's experience.

One way of categorizing knee replacement components involves whether the plastic (polyethylene) is fixed securely upon the underlying tibial component or whether it allows rotation upon the tibial component. These are respectively referred to as fixed bearing versus rotating platform (RP) knees. Tap on the below image to show how a rotating platform knee allows rotation of the plastic in relation to the tibia.

One way of categorizing knee replacement components involves whether the plastic (polyethylene) is fixed securely upon the underlying tibial component or whether it allows rotation upon the tibial component. These are respectively referred to as fixed bearing versus rotating platform (RP) knees. Click on the below image to show how a rotating platform knee allows rotation of the plastic in relation to the tibia. 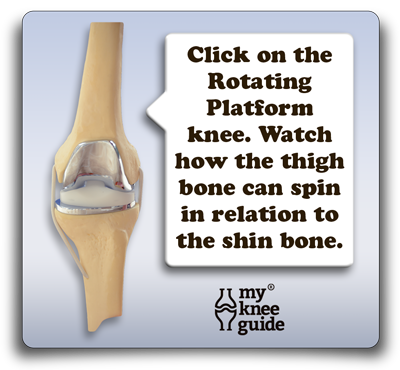 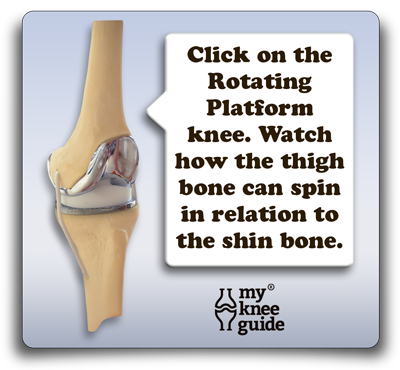 There are theoretical advantages to allowing the plastic to rotate upon its tibial base plate. This type of prosthesis helps replicate the small amount of rotation that a normal knee experiences when becoming fully extended. Another advantage is that there may be less shear stress on the top of the plastic, where the femoral component bends. There are potential disadvantages to this type of prosthesis. Rotating platform (RP) knees are more depended on the surrounding ligaments and soft tissuesligaments and soft tissues to prevent dislocation. They are also more prone to soft tissue impingement. Sometimes, RP knees are recommended for younger and more active patientsmore active patients. Long term studies show similar survivorship of RP knees compared to fixed bearing knees. 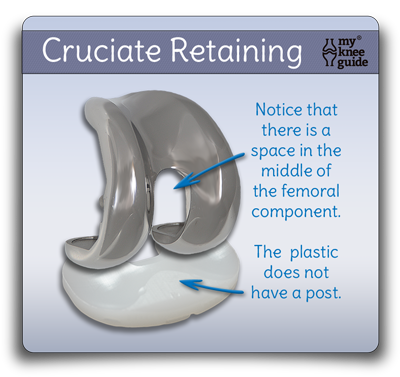 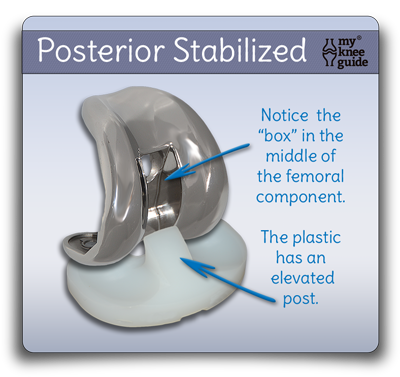 There are advantages to using each type of prosthesis. PS knees allow for the reliable restoration of knee kinematics, small improvements in motion compared to CR knees, and the theoretical reduction in polyethylene wear. PS knees are specifically indicated in patients with severe deformity, severe flexion contracture, previous removal of the knee cap, and during revision surgery. CR knees require less bone to be removed, decrease the chance of a “patella clunk” syndrome, and decrease the potential complications associated with having a polyethylene post.

When looking at an x-ray, there are defining characteristics that can be used to identify whether a posterior cruciate substituting (PS) or cruciate retaining (CR) knee was implanted. This is due to the “box” that is required to make the PS knee function correctly. On the side view of the x-ray, the difference can be seen on the metal component on the thigh bone (femur). Look at the following example: The blue arrow points to the “box” portion of the prosthesis of the PS knee. The red arrow points to CR knee. Notice how the CR knee requires less bone to be removed. 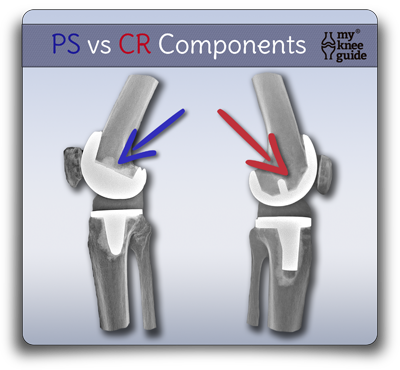 The last category has to do with how the metal components are fixed to the underlying bone. Most replacement systems use a special type of cement called methylmethacrylate to bond the metal component to the bones. This cement sets up in approximately 13 minutes (during the surgery) and allows the patient to walk without restricting the amount of weight bearing after the procedure. There are other ways to secure the prosthesis to the bone without cement such as using an “interference” fit or by augmenting with screws. Use of these techniques may also allow the patient to progress to immediate weight bearing.

Does your Joint Replacement have a Warranty?